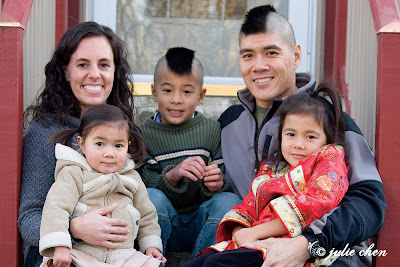 i decided to post our family christmas letter, as it is an entertaining look back at our year, written by my hubby... it's long, but enjoy! (p.s. the mohawk is gone, as sam is starting nursing school & wanted to make a professional impression :)

With 2009 coming to a close, we are so thankful, even through the ups & downs. This year we continued the now 2-year-old family tradition of blueberry picking in Michigan. They actually were not as good as we had remember…actually some of them were just down right sour! Now, I am mad about spending money on sour blueberries! I guess the new rule is do not pick blueberries in a orchard that is next to the interstate highway in which we can see the cars passing while picking! We also did some apple picking at Edward’s Apple Orchard & now the whole family is addicted to honey crisp apples. I (Sam) eats a minimum 2 a day so he can keep the doctor away, but really all that means is that he has been pretty regular, clinically speaking, during the picking season. We also took our first road trip to the Colorado Rocky Mountains (a definite highlight of the year). Let me just say that we have some amazing kids that were excellent during the 20+ hour car ride. Our Favorite Little Mister read most of the time (we didn’t even know he was there most of the time, as he was lost in his books), Sunshine Girl talked to Julie the ENTIRE trip & colored princess drawings created by Juile—thank You Jesus for a wife who has a B.F.A! (I knew that degree would coming in handy…), & Pumpkin-Poos pretty much sat in between the kids trying to see what they were doing (or pinching them to get their attention). Humorous story—on the way there we get to Aurora, Il (a mere 25 min into the drive) & Sunshine Girl starts saying, “I really need to go POO!” So we end up stopping at the McDonald’s right off of the highway to which we end up having a second breakfast of pancakes & magically Sunshine Girl does not need to go anymore. After another 20 minutes in the car, Sunshine Girl again says, “This car ride is SOOOOO long—how long is it going to be?” Thinking how relieved she would be when we actually get there (20 hours later), she pops out of the car & says, “That wasn’t so long! Colorado is so close Mom!” Ahhhh… the time perception of children.

Well, onto the annual report of the members of the Chen clan…

My Favorite Little Mister is 6 ½ years old & is our building, thoughtful, jumping bean of a boy. He continues to be a hodgepodge of Julie’s reserve, diligence, judiciousness, astuteness & eating preferences, combined with Sam’s energy, humor, & love for science. He is in 1st grade to which he has made some pretty cool friends. One of which is our car pool partner has been a great companion building LEGO’s® & playing make believe. His favorite part of 1st grade when asked is, “MOM! We get THREE recesses!!” which I have heard is a big hit with kids. He still is a LEGO® fanatic & has built some amazing things such as a dog (which is Pumpkin-Poos’s favorite animal), robots for mommy, spaceships, etc... He loves to read & enjoys the math homework that we find on the internet for him, even sometimes exclaiming, “I love these things!” Oh how I hope that is the case when he is studying for the SAT’s… He is our most thoughtful kid, as he is constantly making books & notes to tell us how he appreciates us & loves his siblings. He even created a phonetic book for Sunshine Girl to help her learn how to read! This past summer at vacation bible school he also publicly professed that he believes that Jesus is his Savior. Just recently he lost his first tooth in which Julie & I were on a date & missed it (& literally it got lost down the drain). Two days before losing his tooth, he mentioned (mimicking his dad), “There is no such thing as a tooth fairy—it’s just mom or dad giving the money…“When we got home that night, the fairy visited & left a red envelope (the kind used for Chinese New Year) with 2 quarters in it under his pillow. He then awoke the next day not even knowing it was there & Julie pointed it out to which he exclaimed: “Now we can tell daddy the tooth fairy IS real & ours is Chinese!!!” Love it! He continues to amaze us with his heart, intellect, & skills as he has become pretty skilled with stapler & a roll of tape to create a lot of things. One last observation is his great sense of humor to which has been a combination of the new found introduction to Calvin & Hobbes (introduced to him by yours truly) & by the genes passed down through his Ah-gong (grandfather) as some of his favorite jokes are— “what do you call a old tire?...a tired tire! Hahaha! Get it?? Tired tire??” Another one: “What do you call a bird that steals?...A robbing robin! Get it?? Robbing robin??!” Ahhhh the lesson on homonyms was a field day for him in class. This type of humor has been replacing much of the potty/poo/pee/fart/burp jokes so I enjoy this measurable exhibition of becoming more mature.

Sunshine Girl is 4 ½ & can be summed up by combining Julie’s beauty, love for art (can’t stop drawing), with my spastic personality, love for music with his sleeping & eating preferences. Come to think about it, do I even have a eating preference? I suppose “contain calories” is a preference, or is it just quantity? Anyways…she still is our entertainer as her favorite activity this year was ballet class & loves to demonstrate at home to which Pumpkin-Poos loves to join in & mimic her. She is CONSTANTLY singing, creating her own songs (with motions of course) & repeating the songs she learns in preschool. Unfortunately, she sings a bit flat…actually just plain monotone, but to make up for the tone she really cranks up the volume. She will sing loud…I mean really LOUD to which the passengers in the car with her (My Favorite Little Mister) will say, “You are singing so loud I can’t even think!” To which she will take it from a level 11 to a level 9 in volume. Of course being the star performer she dislikes anyone singing with her & will “shush” others to make sure her performance is heard. She has been known to wake up the others when they are sleeping in the car on the way home from a night out, but we still LOVE her singing. She continues to enjoy school & has made a several good friends, including a boy to which I have been thinking my deferment in procuring an intimidating firearm/weapon may be shorter than I expected. As mentioned, she has demonstrated that she has my sweet tooth & eating habits as she is our second biggest eater next to Julie (wait, OH, I mean Sam) & can be found eating whatever & whenever. She also is our night owl as frequently we have begun to name her “the bump in the night”. While My Favorite Little Mister plays super hard throughout the day & falls asleep within 5 minutes of putting him to bed, Sunshine Girl will be found frequently at 9:30 or later (1 ½ - 2 hours after their bed time) singing, kicking the walls, bringing out toys, reading books in the pitch dark. She continues to make us laugh & enjoy life as she enjoys so much.

Pumpkin-Poos is 2.20833-year-old & is probably best describde by a ball full of passion. In terms of her looks, she has been mistaken as adopted when Julie was alone with her—though she does have Julie’s ear lobes. We had put it to a vote & the clear winner of our loudest child has been won by this little girl. (Ama has said that all of her energy is going into her voice). Clearly I had made the right choice to change her Chinese name from “the Lord’s peace” to “the Lord’s joy” (shout to the Lord with trumpets & the shofar joy). Despite her volume, she does have trouble speaking & is in speech therapy, but she can communicate in many ways. Julie has become somewhat of a linguist as she can delineate between “bbaaabaa” from “baabaaa” which mean blanket or baby doll with the closing eyes & not the one that is battery powered. I think there was some Russian influence as her best word is still “DA!” which means several things: Yes (most of the time), Dad, That, & I am saying something…anything so I get out of this lecture about taking my sister’s markers. She is our most avid dog lover & can spot one from a very long distance which I am thankful for her excellent eyesight. Just a couple of months ago while in a shopping cart, she started shouting, “WHoooHHOOO!! WhhoooHOOOO!!”—which means, “Woof woof look there is a dog!!” I could not see it for the life of me until I had walked another 40 feet closer to a endcap which contained gift cards & one of those gift cards was for PetSmart & had a .75 cm dog on it. How she saw it was amazing to me. She continues to adore her older brother & loves her sister with that sisterly love. You know the kind of love that is fiercely competitive & likes to play the “let me pinch you for fun” game with Sunshine Girl. We can really tell they love each other as Sunshine Girl will reciprocate by loving her back with a “I will squeeze you till your eyeballs pop out & then fall on top of you” hug to show how much she loves as well. We are so thankful for such expressive daughters. We love how Pumpkin-Poos brings so much passion & joy to the house—it would be boring without it.

Julie continues to be the most amazing wife in the world. juggling the kiddos while taking care of the house & all of the freelance work she gets from Tyndale, which we are really grateful for. Probably the biggest thing that has happened with Julie is the opening of Life Verse Design, Inc. in which she is doing some AMAZING designs with God’s Word & other inspirational quotes to encourage people & bring them a visual picture of God’s Word. This is the link to the store if you want to see what she is doing: (http://www.lifeverse.etsy.com) Not only has she been able to use her artistic gifts, but because of God’s grace, Demdaco (company that sells the Willow Tree® people in Hallmark stores) has decided to license her design! (http://www.demdaco.com/SearchResult.aspx?Vendor=374&ViewAll=True) As you can see we are not kidding! God is really generous. Julie also has started a blog: http://lifeversedesign.blogspot.com/ & you can read up on her latest doings.

Sam has finished up his 7th year teaching at Community College & has made a big switch as he was granted a sabbatical to obtain a Masters of Nursing Science in Chicago. So he will be studying for the next 18th months…ahhh the circle is complete now the master has become the student—no wait that is not how it goes! Anyways, this last year he had been involved in leading worship & that season is coming to a close. He has met some amazing student that love Jesus intensely & has been encouraged to do the same.

Well those are the updates & we again, we hope you remember the advent of our Lord Jesus Christ & celebrate his gift to us as we await His return! May you worship Him fully and trust in His grace to keep you for the new year.