year of the rabbit. 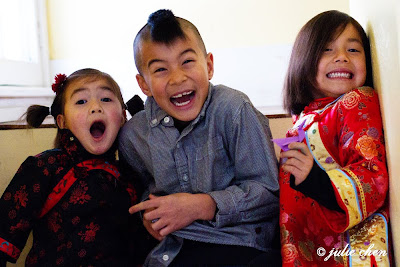 {3 crazy half-chinese kids are wishing you
a very happy chinese new year!}
yes, the year of the rabbit has officially begun. i am blessed to have married into a chinese family (you see, i am not chinese & it's been fun to meet people in person when they are expecting me to be chinese :)

sam's family has such a rich heritage & it has been so fun to learn about the culture (i LOVE different cultures & always tease him that i often thought i would marry someone from a different ethnicity, but i thought he would be french!)

2 things i have learned in the culture which are of utmost importance: food & family. or should i say family & food? oh, my. they still have a hard time with how little i eat. and, i have come a long way baby. when we were first dating, i came to his home for dinner & there on the middle of the table was a bowl full of chicken feet. yes, a claw sticking out. i think i ate rice that night & totally (unknowingly & without meaning to) offended his mom (at that time i had NO IDEA what a big deal food was!) (i may have even asked for salt for my food... oh no!)

in any case, another fun tidbit is that sam's great, great grandpa had the first bike ever in his village in taiwan & was somewhat of a celebrity because of it.

sam was born here in the burbs & hopefully we will travel to the far east someday (i will pack a lot of snacks!) another funny thing is how often i was asked when i had my chubby newborns "when did you get them?" or "how long have you had them?" or "isn't it neat when you get them that way?" what?! they don't look like me?! ha. i always say they have my ears & that's about it. {and by the way, can i just say here & now that adoption is an AWESOME selfless thing which we both admire so much}